Movement by part of the body used.

Describing movements by the body part used to perform them is very popular!

There are eight body parts commonly utilised in belly dance:

Arms - either held still in space to accentuate movement elsewhere, or in action themselves

Belly - for those iconic abdominal rolls, flutters and waves

Feet - for stepping, turning, spinning and also for bouncing or level changes like flat foot to releve (ball of foot).

Hips - so much used in belly dance, maybe it should have been called hipdancing!

Legs - follow those feet, or absorb movement from other parts

The skill level of each individual dancer will have some bearing on whether a movement is isolated to one part or a complex layering.  A position of knowledge allows the dancer to choose whether to isolate or to layer.

A is for Arms 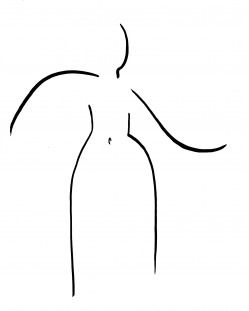 A is for arms

This means both positions and actions.

Arm positions allow you to keep attention on  movement being made elsewhere.  For example, emphasising hipwork.  They are many and various, including:

Baladi arms (Frequently used for a particular arm position) as if playing ‘air piano’ with hands slightly wider than hip width.  Used to name where the arms are held for dancing the folkloric style of dance, raqs balady

Neena arms: arms crossed parallel in front of chest (shoulders relaxed, one forearm held diagonal as that hand rises to the opposite cheek (can be done to express emotion)

Orientale  arms:  arms held at shoulder height, with elbows facing back, shoulders remain as relaxed as poss.  Quite balletic, used in cabaret & to add emphasis sometimes in tribal styles.

Salute aka display your hair: one arm out, parallel to floor, other arm ‘salutes’ behind ear (or touches hair behind ear, to draw attention to your shining mane)

A is for arm movement (check these out by the letter of the alphabet from the home page):